The island of Sicily is one of the most unique and fascinating corners of Italy. The island has a richly variegated history, singular culture, distinct dialect, and true “fusion” cuisine—all of which reflect millennia of successive conquests that have taken control of the island. Each new wave, including the ancient Greeks, Romans, Arabs, Normans, Swabians, and French and Spanish Bourbons, has left a lasting mark. Today, Sicily is a captivating patchwork of architectural styles and a local culture that is both multiethnic and deeply Sicilian.

Whether you’re an ancient history enthusiast, culture vulture, gourmand, or simply want to relax on the beach, Sicily offers the perfect retreat. In addition to its archaeological treasures dating as far back as Magna Graecia, spectacular Byzantine mosaics, and unparalleled cuisine, Sicily is also lined with gorgeous beaches and has become a luxury travel hotspot over the past few years, with a number of top-tier hotels and resorts attracting discerning clientele from across the globe.

If you’re toying with the idea of a Sicilian holiday, Visumo Travel can plan a custom itinerary tailored to fit your travel style and pace. Here are a few of the best places to visit in Sicily to orient yourself: 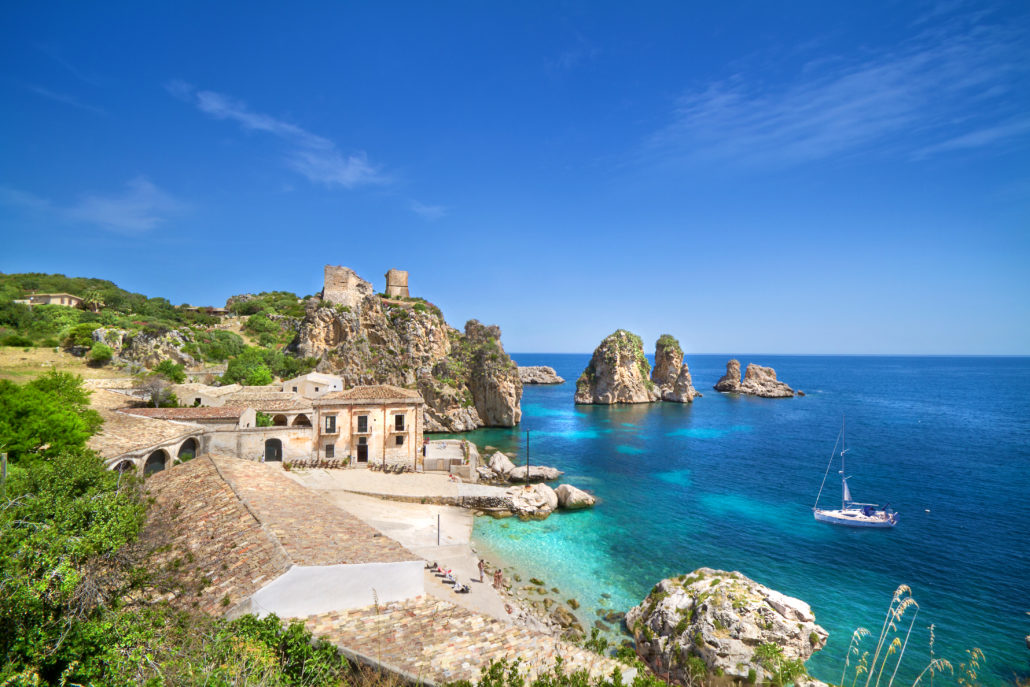 The Best Places to Visit in Sicily: Palermo

Palermo has a history that dates back thousands of years when the Phoenicians established a colony on this strategic spot in the 8th century BC. The settlement was later conquered by the Romans, the Arabs, and finally, the Normans, all of whom influenced the architecture, language, and culture of this bustling Sicilian capital.

A spellbinding mix of picturesquely decaying Baroque palazzi with laundry flapping in the breeze from balconies overhead, bombed-out ruins left over from WWII, vibrant outdoor markets selling everything from local street food to home appliances, and an endless stream of traffic and pedestrians, Palermo is the essence of Sicily concentrated into a single city.

Top Sights to Visit in Palermo

Most of the city’s most important sights are set along Via Vittorio Emanuele. Here you can stop at Palazzo dei Normanni, the Norman palace home to magnificent frescoes, and the 12th-century Duomo, built by the Normans and later expanded by the Goths, the Spaniards, and the Neapolitans. There is also a clutch of smaller churches and palaces where you can make out the distinct Arab, Norman, and Byzantine architectural influences, as well as the Quattro Canti statues and fountains where Via Vittorio Emanuele and Via Maqueda intersect.

Be sure to stop by the  Fontana Pretoria in Piazza Pretoria, known locally as the Fountain of Shame. This 16th-century work caused public outcry when it was unveiled due to the plethora of nude statues adorning its pool. Another A-list sight is the splendid Teatro Massimo Vittorio Emanuele—you may recognize it as the setting of the final scenes of the Godfather trilogy—the largest opera house in Italy.

If you have time, take a trip to Monreale, just 15 kilometers outside the city of Palermo. Here, the 12th-Century Norman-Arab Cathedral of Monreale awes with its shimmering 6,000 square meters of mosaics.

Palermo is known for its fabulously authentic open-air markets, chaotic and reflective of the city’s own mishmash of cultures and languages. The most famous are the historic Vucciria market, which has been operating for 700 years, that lines Via Roma toward Via Vittorio Emanuele in what is one of the most Arabic sections of the city and the Mercato di Ballarò, Palermo’s busiest market which covers several city blocks southeast of Palazzo dei Normanni.

Palermo has a number of local specialties that you can find in the city’s restaurant, but the most authentic local cuisine is found at the street stalls dotting the city center. Try pane con la milza (pani cà meusa or vastedda in the Sicilian dialect), a sandwich made of fried beef spleen, with lemon and cheese. If you’re looking for something less adventurous, go for panelle, a fried chickpea flour flatbread, or arancini, deep-fried rice balls. 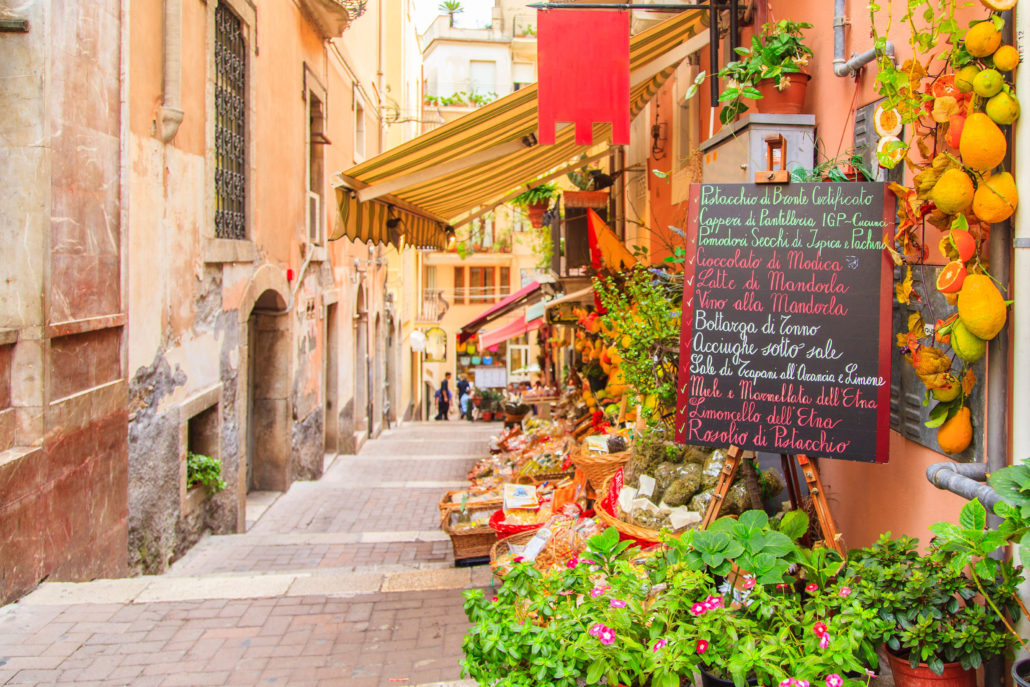 The Best Places to Visit in Sicily: Agrigento

Founded by the ancient Greeks in the 6th century BC, this city set on Sicily’s southern coastline was one of the most important in the Mediterranean during the Magna Graecia period and is home to some of the most spectacular Greek ruins in the world.

Top Sights to Visit in Agrigento

The UNESCO-listed Valle dei Templi (Valley of the Temples) is the hills outside Agrigento contains intact and  breathtaking Greek temples that are a must-see on Sicily, including the Temple of Concord and the Temple of Juno, both dating from the 5th century BC. You can also take in the remains of the massive Temple of Olympian Zeus, a spectacular telamon, or figure sculpted in stone, which once served as a pillar that supported the temple’s roof.

While in the area, stop by the charming fishing town of Sciacca to soak in the timeless atmosphere of Piazza Scandaliato, visit the historic thermal baths (once beloved by the Romans), and shop for local ceramics.

The Best Places to Visit Stay in Sicily: Ragusa

Sicily’s UNESCO-listed capital of Baroque architecture, Ragusa is composed of two main districts: Ragusa Superiore, located on the hilltop and laid out in a modern grid pattern, and Ragusa Ibla, rebuilt where the historic center was destroyed by an earthquake in the 17th century. This Medieval area, a captivating warren of winding lanes and small squares, is where the most exquisite Baroque churches and palazzi are concentrated.

A vibrant city where stately Baroque churches sit surrounded by bustling outdoor markets, cafés, and piazzas, Ragusa Ibla is one of the delights of Sicily. The city also hosts a roster of music and cultural festivals, is known for its street art murals, and even boasts a smattering of Michelin-starred restaurants.

Top Sights to Visit in Ragusa

We also recommend walking up the salita commendatore, the winding staircase that links Ragusa Ibla with Ragusa Superiore above, to admire sweeping views over the rooftops of Ibla and the surrounding countryside. Be sure to stop in for a stroll through the 19th-century Giardino Ibleo at the eastern end of town to unwind among the symmetrical hedges and pretty fountains under the shade of towering palm trees. 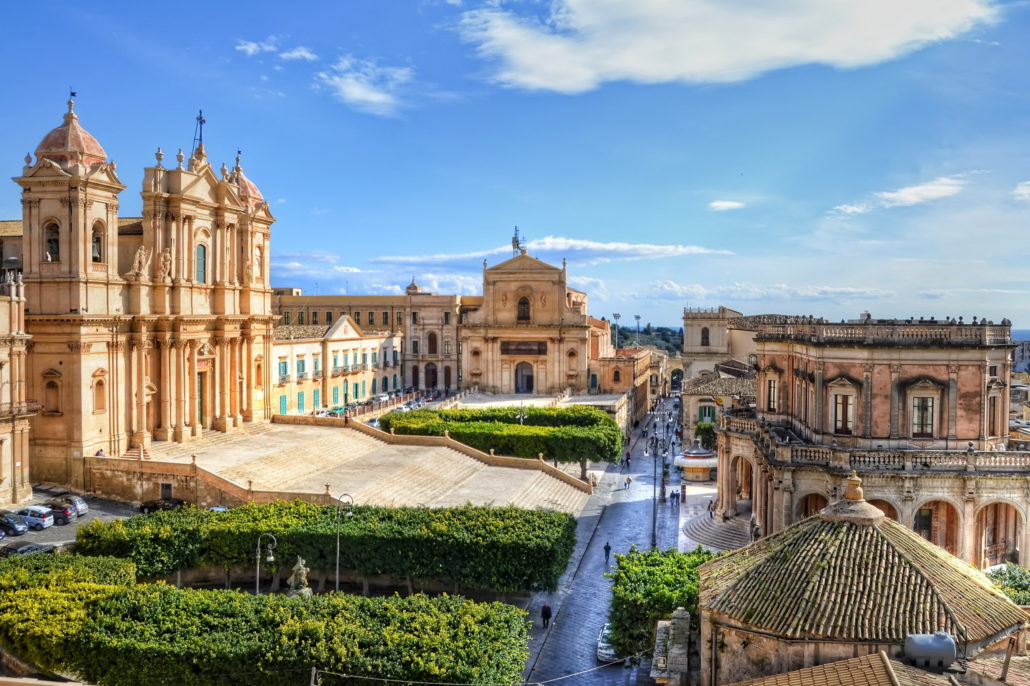 The Best Places to Visit Stay in Sicily: Syracuse

Like Agrigento, Syracuse was one of the most powerful cities in the Mediterranean city during Magna Graecia period and today is home to a number of spectacular archaeological sites right in the center of the old town. A mecca for archaeology enthusiasts, this beautiful Sicilian city will also charm lovers of Italy’s la dolce vita atmosphere and excellent cuisine.

Top Sights to Visit in Syracuse

Home to the largest Greek theater and the oldest Doric temple in Sicily, Syracuse’s Parco Archeologico della Neapolis is a must for ancient history buffs. Stop in Piazza Pancali to admire the Temple of Apollo, as well as the remains of the massive Altar of Hieron II, before continuing on to the city’s impressive archaeological museum. Fans of the Baroque period will appreciate the elaborate Duomo and the Church of Santa Lucìa alla Badìa, which houses Caravaggio’s “Burial of Saint Lucy”.

Take a trip to the nearby town of Noto, which has a Baroque 17th-century old town that was designated the “Val di Noto and the Baroque” UNESCO World Heritage site in 2002, along with nearby Modica, home to some of the best examples of the Sicilian Baroque on the island. 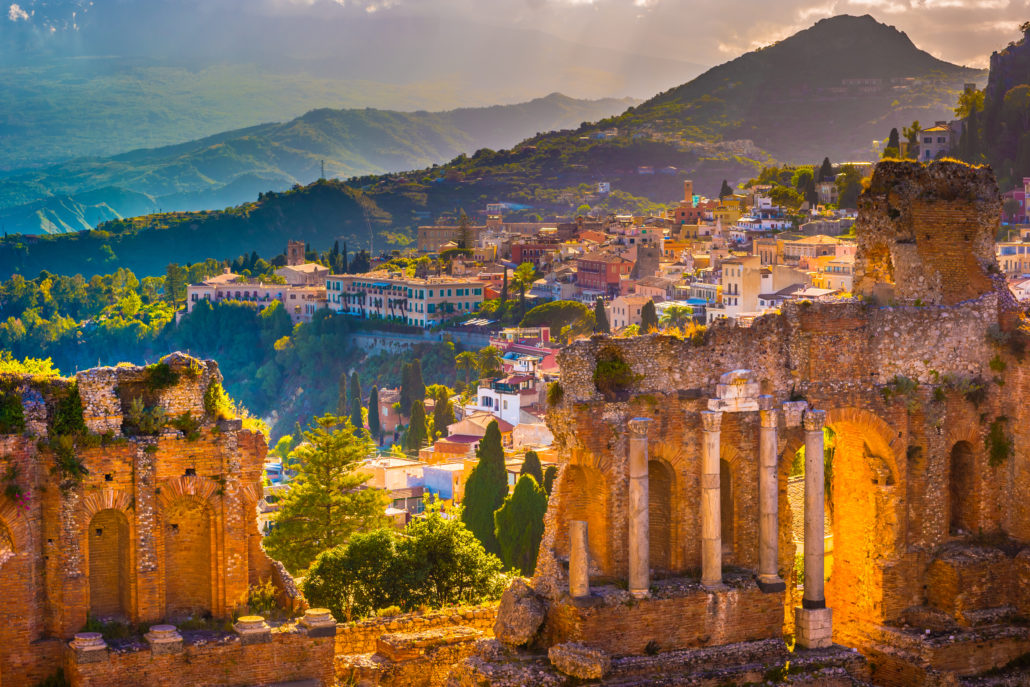 The Best Places to Visit Stay in Sicily: Taormina

One of the most panoramic cities in Sicily, Taormina sits atop Mount Tauro overlooking the island’s coastline, sparkling waters of the Mediterranean, and the looming volcanic peak of Mount Etna. Like other island cities, Taormina saw successive waves of conquerors from the Romans to the Arabs and Normans, and the old town is an open-air museum of different styles of architecture that has drawn travelers since the 19th-century Grand Tour. Today, it is one of the most popular destinations in Sicily.

Top Sights to Visit in Taormina

The most stunning sight in Taormina is its magnificent Greek theater, which dates from the 3rd century BC and was later renovated by the ancient Romans. Second in size only to the Greek theater in Syracuse and incredible state of preservation, this theater is still used to hold concerts and events. Built to overlook both the waters of the Mediterranean and Mount Etna, the theater’s acoustics still impress.

After taking in the Greek theater, stroll through Piazza Vittorio Emanuele to visit Palazzo Corvaja, a heady mix of Arab, Norman, and Catalan-Gothic architecture, the Church of Santa Caterina, and the remains of a small Roman theater. Nearby Piazza del Duomo is home to the 15th-century Church of San Nicola has and has a delightful Baroque fountain topped by a centaur, the symbol of Taormina.